A couple of years ago, it was announced that an ownership transition would start to take place at the Tucson, Arizona-based John’s Garage Doors. Will Lopez, the new owner, is pleased to announce that the previously announced ownership transition has now been completed. He also stated that the well-recognized name ‘John's Garage Doors’ will remain the same, as will the high level of service and affordable prices that have long been associated with the local Tucson garage door repair business.

Will is happy to announce that they will also remain a truly family-owned business as his son works with him in the field and his wife answers the phone and books the appointments. This means that customers are always dealing with someone with a stake in ownership and that ensures that customer satisfaction will remain of the utmost importance to those at this reputable garage door services provider. 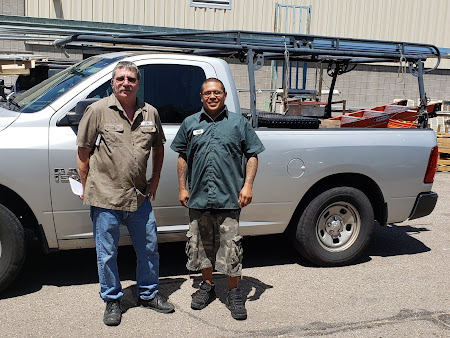 Lopez also mentioned that he will miss the mentorship that the previous owner John Mucciacciaro provided him with for so many years. It’s because of that working relationship that he has continued to run the business with the same hard-working attitude and high integrity that the previous owner had operated with. He added that it’s a formula for customer satisfaction that has always provided positive results. This has resulted in such things as the company carrying a highly commendable 4.9 out of a possible 5-star rating on its Google Maps Business Listing with nearly 100 reviews. Examples of these include Francisco Romero stating, “5-stars to John's Garage Doors and Will Lopez. Highly professional and quality work. Will was recommended by a relative after my garage door spring broke. I contacted Will and he responded right away. Working in construction delays and backlogs are expected but Will was able to get us scheduled right away and had the door working in no time. The garage door spring was replaced as well other parts that contributed to the failure of the spring. Will explained how the spring worked and why he recommended to replace the other parts as well. I will use John's Garage Doors going forward and recommend them to anyone that needs garage door help in the future.”

Dee See also proclaimed, “Great service. Had a garage door opener that quit late on a Thursday. A call the next morning resulted in a Saturday afternoon appt. Daniel was early, courteous, and very capable. He quickly put in a new system that is noticeably quieter. But he distinguished himself by taking the time to make sure we understood what needed to be done, maintenance, and a potential future problem. The cost was very reasonable for a timely repair and came backed up by a two-year warranty. I believe the current owner is not the founder but has continued the business for the past several years. So even without John, I highly recommend John's Garage Doors for the quality of work and the care in which it was done.”

Will was also pleased to say that they will keep offering the same wide variety of garage door services that they always have over their many years in business. This includes being experts when it comes to repairing garage door openers and replacing older ones with new quieter and smoother working models. They are also still prepared to handle the many difficult spring repair and replacement services that are often needed on Tucson area garage doors. Something that the owner highly discouraged DIY repair attempts on because of the dangers that come along with working on high tension garage door springs. He stated they also will still be doing garage door rebuilds and new garage door installations.

The company’s many garage door services will also continue to be available in many locations throughout the Tucson area. This includes Oro Valley, Marana, Saddlebrooke and Vail areas. The new owner encouraged those that would like to know more about the garage door repair and installation services that they offer to contact them by phone, email, or by filling out and sending in the form found on their website.

Talisman Casualty: Why Processing A Claim Is No Hassle